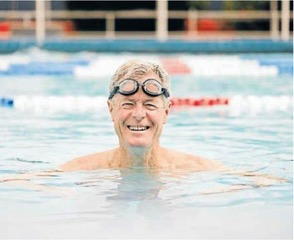 When the starting gun goes off for one of Sydney’s most popular ocean swims, Chris Curran will pull on his budgie smugglers and dive head first into the water for his 33rd go at the event.

Curran looks just as comfortable in the pool as he does on land, and with the amount of time he spends in the water it’s no wonder.

He said he loved the open water swim because it brings him face to face with nature.

Across the years it has never been about winning, but during the 2015 Cole Classic, much to his amazement, Curran came second in his age division.

“I just got in there, did the race, packed up, went home and few days later I received an email saying that I’d come second in my category,” Curran said. “It was very surprising.”

For the 2016 Sydney Morning Herald Cole Classic presented by Virgin Active, Curran will be competing as part of a team.

“Primarily it is a personal thing but we are going to compete as part of a team this time,” he said.

“Places aren’t all that important but if our team can be recognised for putting in a good effort it can make us feel good about ourselves, particularly as we are getting a bit older.”

Previously Curran competed in his team, the Wahroonga Whalers, but in 2016 the squad is getting a fresh name and he will lead the Take Your Marks.

For all the young, budding and enthusiastic swimmers thinking of having a crack at the one, two or five-kilometre swims, he has some good advice.

“You need to get in and train for a number of months beforehand. Otherwise you won’t make it. You’ve got to get the right act together at the right time.”

The Cole Classic will be held at Manly beach on Sunday, February 7, 2016.